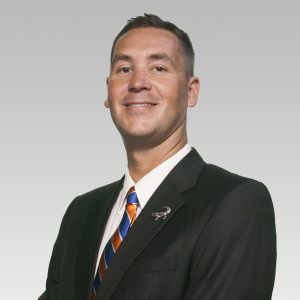 David Huelsman was a member of the swimming and water polo teams at Redlands High School in Redlands, CA. Throughout college he played water polo and swam, as well as coached swimming with the City of Corona. He was also the head swimming coach at Chino Hills High School. He moved to Gainesville in 2007 after graduating from the University of Redlands, taking a position at The University of Florida as their Information Security Architect. Coach Huelsman coached Baseball at Gainesville High School from 2007-2014 and led the Canes to many victories including two appearances in the final four state tournament. He returned to Swimming and Diving in 2013 at GHS. Since then, he has led the Canes Swimmers to numerous victories including a 2nd place Men’s finish at the State Swim Meet in 2013 and a Women’s State 1st place title in 2015. Since moving to Gainesville he has also been a member of the University of Florida’s Men’s Water Polo Team, and assists them as a faculty advisor. In 2016 Coach Huelsman became the Head Men’s Water Polo Coach at the University of Florida. In the years since the Gators have won 3 State of Florida titles, 2017, 2018, 2019, with 3 CWPA National Championship appearances, and a 6th place finish in 2019. Coach Huelsman was named CWPA Florida Conference Coach of the Year 2017, 2018, 2019. USA Water Polo recognized Coach Huelsman in 2019 with the MONTE NITZKOWSKI AWARD - MEN'S ELITE LEVEL.

In April 2013 Coach Huelsman and Coach John Trimble started the first youth water polo team in North Florida. Since then, they have grown the program from just a few kids at the first practice on April 13, 2013, to a program with over 50 athletes, holding practices six days a week. Growing the sport of water polo is a passion of Coach Huelsman’s and he has been instrumental in bringing water polo to North Florida. He continually pushes the agenda of water polo in every pool forward. He has assisted in launching many other teams, helping them with setting up clubs and high school teams. He has also assisted many young upcoming coaches learn how to be effective leaders, cultivate young athletes, and how to propagate water polo.

In 2015 he started the first North Florida FHSAA High School Water Polo program at GHS. He has been working with other swim coaches in the area to assist them in starting programs at their own schools. It is a personal goal of his to have a new North Florida FHSAA District for Water Polo within the next two years. The hope is to bring the sport to least three more new schools and advance water polo throughout the entire southeast.